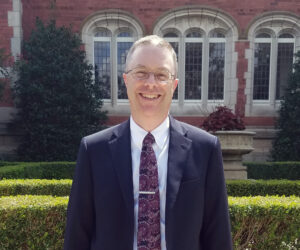 As an introvert, I generally prefer not to talk about myself, but since this is my personal web site, I really ought to provide some information about myself.

I love teaching Latin courses, especially the intermediate ones. I also enjoy teaching general education courses such as Classical Mythology, Ancient Drama, Ancient Epic, and my new course, States in Crisis in Ancient Literature. It's fun to introduce students to the subject of Classical culture.

I have written articles and delivered papers on the poetry of Lucretius, Vergil, Tibullus, Ovid, and Lucan. My main interest in Latin poetry is the allusive technique of the poets of the Augustan age, particularly Ovid. Most of my publications concern Ovid's Tristia, but I have also published a previously unknown medieval Latin commentary on Lucan, and I collaborated with Jason Houston on a translation of Boccaccio's minor Latin works (under contract with Harvard University Press' I Tatti Renaissance Library).

My current work on the Digital Latin Library project focuses on facilitating the encoding of Latin texts so that they can be read by both humans and machines. This work includes one of my most cherished experiences as a teacher and a scholar: collaborating with my talented undergraduate student Virginia K. Felkner on a prototype application for automating the encoding of Latin texts. I am also collaborating with Hugh Cayless on XSLT stylesheets to transform digital critical editions into a variety of formats, including LaTeX for producing print-ready PDF copy. I am looking forward to finalizing the DLL ontology so that I can publish our authority records and work files as a triplestore.

My directorship of the Digital Latin Library overlapped with my decade of service (2009–2019) as chair of OU's Department of Classics and Letters, during which time the department moved across campus to new quarters, added seven new faculty members to its roster, and maintained steady enrollment in its programs even as humanities departments at OU and other institutions saw their enrollments decline. I led the department through two highly favorable academic program review periods and put it on a solid footing for my successor, who has continued to build the department's national and international profile.

Other leadership positions I have held: